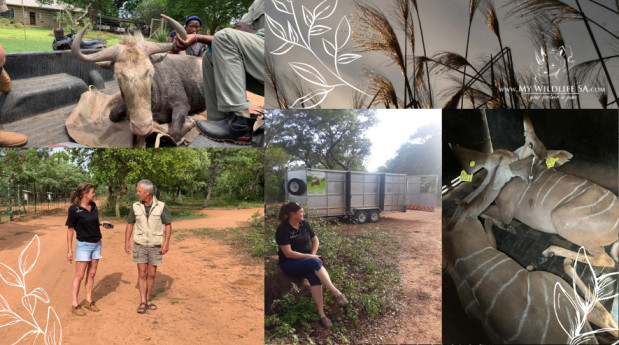 On the morning of 22 November the My Wildlife SA team consisting of Stephanie as Driver and Susan as Assistant, left the Thabazimbi base at 05:00 to load Kudu at Silent Valley Stud Game Breeders situated in Bulgerivier.

On arrival at Mr. Du Toit’s farm, we are met at the gate and we proceed to Camp 6. The team, together with Dr. Ampie Viljoen prepares Microchips, Tags, and DNA kits.
At 07:23 Dr. Ampie goes in to dart the first 2 females, they are daughters from 68″ Nkhhulunkhlu.
08:00: Quick teamwork and everything is done. DNA is taken in the form of hair, they are tagged, dipped, microchips inserted, and woken up. The girls are up and we move them to the front compartment of the trailer.

At 08:10: Dr. Ampie goes to dart another 2 in the second camp where the Sire is 69″ Nkosi. Indeed precious cargo again in our trusted Matopi today!
By 08:45 we thank everyone involved in this morning’s smooth proceedings and leave the farm to take on the long road toward Gravelotte…Batiki here we come!
….but first pass by Emaweni, just outside Mookgopong, to load 2 King Wildebeest Bulls that are also going to Batiki.

On arrival at Emaweni we are greeted at the gate and informed that Dr. Johan Barkhuizen is already in the camp darting.
By 12:39 after Stephanie and Craig spoke to Garth, the first Bull that was brought to the trailer but was then taken back to the camp as he did not have big enough patches on his sides…a second Bull was darted and he was loaded in the middle compartment of our trailer.

Dr. Johan Barkhuizen returned to the camp to dart another Bull. At 13:40 the second Bull was brought to the trailer, quickly measured, and loaded in the back compartment of Matopi.
The team thank everyone and left the farm to take on the last leg to Gravelotte!

We arrive at Batiki at 18:49 where we then followed the Farm Manager Andries to the kudu camp, Mr. Garth Saunders joined us there. All 4 Ladies jump out to greener pastures without any hesitance!

Now! Off to the camp for the 2 King Bulls, we follow Garth. Both bulls are out of the trailer by 19:09! The team follows Garth to the main lodge where we met up with his Spouse Mandy. She prepared a lovely dinner for us all!

Tummy’s full…the team retires to their room to be up bright and early for the Waterbuck loading! 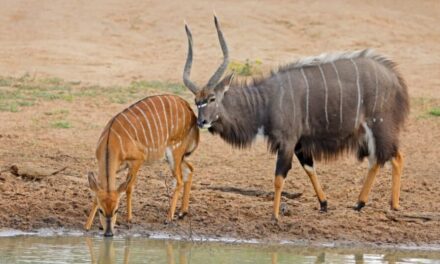 Successful deliveries all the way! 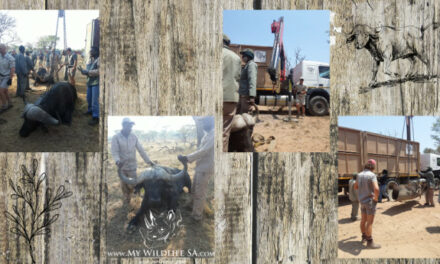